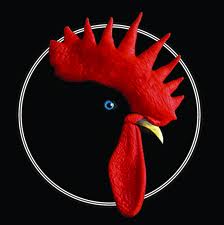 If you were at the meet-up last night, you'll already know that Rooster's Brewery are the latest kind souls to offer a hand of friendship to our group. Unfortunately, the hand is holding a card, and on that card, in bold capital letters, it says just one word: FIGHT!

Yes, it's competition time again. No sooner have we announced the winners of our previous competition, generously hosted by Ilkley Brewery, than Rooster's come along and plop another one into our laps. This time, the gloves are off. Rather than brewing to a brief, as with the Ilkley competition, this is a very different challenge - brew whatever you like, just make sure it's better than everyone else's!

So, what's hard about that? Just brew the best beer you can, make sure that you try hard, but don't go over the top and seem as though you're trying too hard. Maybe have a think about the last beer that made the transition from homebrew to trial plant - Rooster's very own Baby-Faced Assassin. Big and bold, but balanced and beautiful. Pale golden ale or chocolate and chilli stout - just make it the best beer you can. No pressure.

The rules are there are no rules! Well, within reason. Each entry must be a clean and balanced beer in terms of flavour for the style. Any style can be entered. Big aromas welcome. An ABV. of 5-7% is recommended.

A Rooster’s goody bag (!) and the opportunity to brew the beer on Rooster's trial plant with Rooster's Head Brewer. The beer will then be bottled (in 750ml bottles) and sold commercially via Beer Ritz in Headingley (and BeerRitz.co.uk)

All ingredients will need to be disclosed to Rooster's and although, where possible, the winning beer will be brewed to the same (up-scaled) recipe, it may have to be tweaked according to Rooster's needs.
Posted by Zak Avery at 14:52

We brew beer at home, and then meet up and drink it with friends.
This is a blog for the use of the homebrewing community based around Leeds, West Yorkshire. We brew beer ourselves, and meet four times a year to try each other's beer.
Homebrewing isn't a hobby - it's a state of mind.