Next Meet - Call For Dates

So, next meet is called for early February. Shall we try and agree a date? We will hopefully have a very special guest to come and talk to us too.
We have been offered space at The Bridge in Kirkstall. It's a little way out of town, but close to Headingley train station, so if anyone has any objection to this, please speak up.

EDIT 23/01/2014 - Our proposed guest, James Kemp, is unable to attend on Fridays. Please let us know what days are preferable in light of this.
Posted by Zak Avery at 11:20 9 comments:

The kind people at Veritas, Leeds have given us the use of their dining room for the evening, so the next meet is called for 6.30pm on Tuesday 22nd October.

Meet from 6.30pm, with a talk from Matt and Chris at the Yorkshire Hops project at around 7pm, then bottle swaps, presenting beers to the group, whatever you fancy really.

If you can give an indication of numbers below, or if anyone would like to bring beers along to present and/orshare, that would be a great help.

Next Meet - A Call For Dates

Just a quick post to see if anyone can find time for a meet later this month?

And as if that wasn't enough to tempt you, the fine chaps at Yorkshire Hops have agreed to come down and have a chat with us about what they're up to - how they got started, how the project is going, and (perhaps most importantly) whether we can sponsor some hop plants and get our hands on some fresh hops from next year's harvest!

Matt from Yorkshire Hops says that the best evening for him would be a Tuesday, so shall we shoot for the either of the last two Tuesdays this month, the 22nd or the 29th? Early meet, Leeds central, early finish?
Posted by Zak Avery at 01:53 10 comments:

Sorry for the lack of activity on here recently - it seems as though everyone is busy with other things.

A quick update on the competition for Leeds International Beer Festival. After gladiator night in the previous post, three beers ended up going through to the final selection process, the eventual winner being Matt Lovatt's summer ale - a pale, slightly tart beer designed for maximum summer refreshment.

At the festival, the beers from the respective homebrew groups were judged against each other, and in a marginal decision, Leeds vanquished their Mancunian rivals by 3 votes to 2. Hurrah for the White Rose!

Matt's beer was brewed for the festival at Kirkstall Brewery, who clearly liked what he did, because they offered Matt a job. Hurrah again!
Posted by Zak Avery at 02:33 1 comment:

Home brewers of Yorkshire, the time is nearly upon us. With any luck, you will have bottles capped and conditioning by now. The meet to choose the five gladiator beers is set for 6pm, Monday 24th June, at Friends of Ham.

We've not had a meet for a while, so as well as bringing beers for the taste-off, feel free to bring bottles for swaps too. The five beers chosen on the night will need to be presented to the final LIBF judging committee by the end of that week. Exactly where, we don't know yet, but it may well be that they are handed in to the organisers at Leeds Town Hall.

Thanks go to Friends of Ham for their generous offer of hospitality, which will be repaid by the purchase of beers on the night.

Homebrewers of Leeds!......of Yorkshire....and Yorkshire folk displaced but still proud to hail from Yorkshire!  A gauntlet has been thrown in our general direction from the homebrewers of Lancashire.  They say that our mothers are hamsters and that our fathers smell of elderberries, and we cannot ignore these taunts!  We have also received word from their Manchester HQ which suggests that we’re not up for the challenge.  It's time to show them how we roll(ing boil)!

The challenge upon us:
Brew a beer style of your choosing, it must be under or equal to 6% abv and must incorporate at least one hop variety from each of the following; Britain, the US and from the New World (Aus/NZ).   We need as many of our group to brew a beer, then we will meet together and choose the five that will go forward to the panel of judges.  The Lancashire homebrewers will do the same.  The judges will then meet, taste, deliberate and choose one beer from Yorkshire and one from Lancashire.  These winning beers will be produced by a breweries in their respective counties, before they are presented to the good folk who attend the Leeds International Beer Festival in September.  Only then will the discerning public choose the ultimate winner.   All proceeds from the sales of the two winning beers will go to a charity of the commercial breweries choosing.

We need to have beers brewed, bottled and to have selected our five gladiator beers by the end of June.  You should be prepared to supply 2x500ml bottles with plain crown caps.  The five beers selected for judging by the Leeds International Beer Festival panel will also need to be submitted with a recipe sheet attached to the bottles. 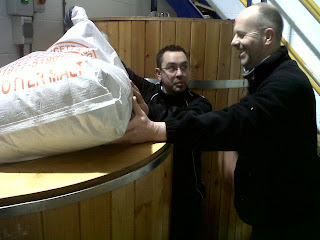 Mark from Revolutions Brewing writes: "Today (March 27), we are brewing the winning entry in our 2013 competition. It is a 4.5% stout called Uprising designed by Pete Hindle @pchindle – he describes it as “a stout for people who don't like stout”. We can't believe that such people exist, but it's good to think we may have a beer that may convert them!

"At the time of writing the Maris Otter, Roasted Barley, Black Malt and Dark Crystal is mashing away – the hopping regime later will consist of Goldings, Challenger and, the special ingredient, Nelson Sauvin!

"We must thank our esteemed judges who selected Pete's beer as the winner from the 11 beers submitted for the competition. They are all people that we have collaborated with in some way over the past few months – please check out the plugs for their assorted projects.

"1 – Paul Marshall (Lone Wolf) - @iamlonewolf – Leeds based musician whose new album The Lovers is fantastic - well-worth checking out – as was the 6.9% IPA we made with him – (there is one cask left, it will be available at North Bar for Record Store Day – April 20th). Lone Wolf will be performing at Jumbo Records on the same day.

"2 – Leigh Linley - @leighgoodstuff – Beer and food blogger Leigh has an exciting new book “Great Yorkshire Beer” about to be published http://goodfoodgoodbeer.wordpress.com/great-yorkshire-beer/ - we're in it! We also collaborated with Leigh on our new 3.9% beer E.P. Session Pale, which has been going down well with drinkers throughout Yorkshire and further afield.

"3 – Dan O'Dell - @hideleeds – Dan and Sam (4) collaborated with us on The Blackout, a 4.5% stout (still available from @BeerRitzLeeds / @BeerRitzOnline in bottles) – to accompany the download of the track of the same name. They have also just released their first vinyl pressing on their record label by Leeds band Dept M @dept_m

"5 – Anthony Kitching (Kitch) - @framkitch @friendsofham – Kindly provided table space for us all to sit around and pontificate in his busy, successful and quite splendid bar. He really liked the winning beer, so we assume it's a given it will be on the bar in a few weeks!

"6 – Tyler Kiley - @Tkiley1 – Quiet, unassuming American gentleman, who dispenses advice and beers from behind the bar at Friends of Ham with unique panache. We discovered that he has a dislike for beers that taste of dirt.

"7 & 8 – Mark Seaman & Andrew Helm- @revolutionsbrew – Thanks to all the entrants for submitting your beers, the overall quality was tremendous and we're sorry that we can't brew with you all.

"We will advise you all where and when the winning beer Uprising will be available!"

Many thank from the Leeds Homebrew Group to Revolutions for this opportunity, and congratulations (again) to Pete - two years on the trot!

We brew beer at home, and then meet up and drink it with friends.
This is a blog for the use of the homebrewing community based around Leeds, West Yorkshire. We brew beer ourselves, and meet four times a year to try each other's beer.
Homebrewing isn't a hobby - it's a state of mind.